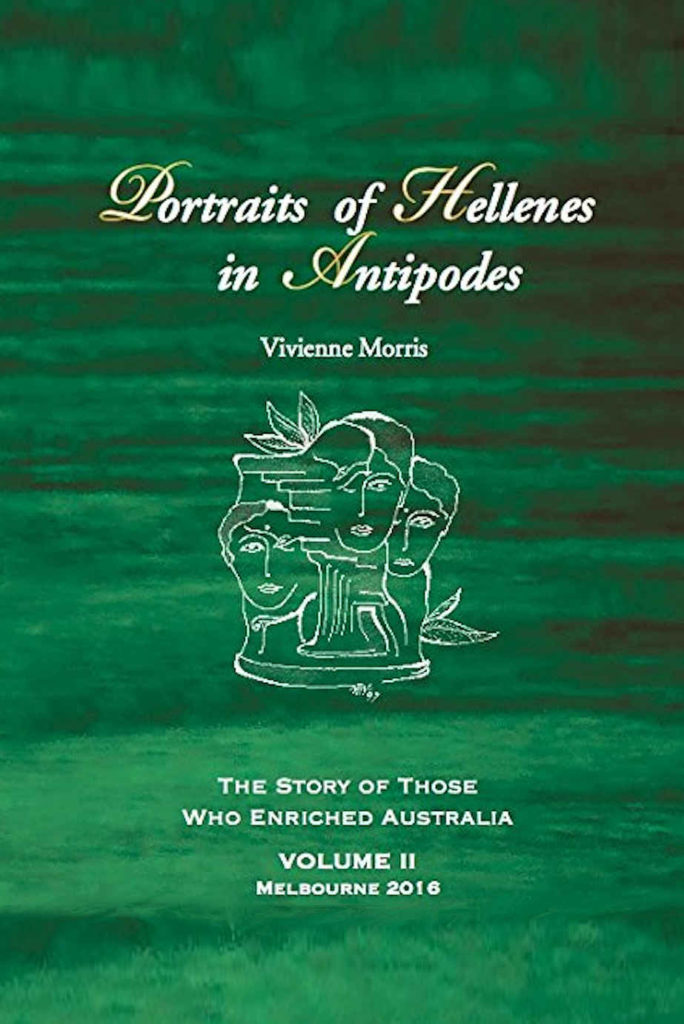 The idea to write this book was sparked within me at about the same time as the realisation that the first generation of Greek immigrants is gradually fading from centre stage, giving its position to the second and third generations.
This is an endeavour to outline the presence of Hellenes in the Antipodes in its true essence and dimension. First and second generation expatriates who, through their ‘journey’ within this country, sketch their portrait themselves.
The first generation is comprised, for the most part, of people who left their villages owing even their fares. They left with little or no money in their pockets; with an empty suitcase but with a heart full of dreams.

Their initial intention was a brief stay, to take as much as they needed from Australia, and then go back. The notion of return was always in their heart and mind. Most gave themselves no more than five years. The most optimistic amongst them believed that one or two years was all that was necessary to make enough money to return to Greece. This belief was usually fuelled by letters that reached the villagers written by those already settled abroad who described their desires rather than the stark reality of the situation. “A letter was sent by someone that was full of lies and fantasies, namely that he bought a house in no time, a car…thereby rousing many to follow suit,” says Manolis Kardiakakis, expressing simply and succinctly a reality that is repeated again and again by the first generation. “They presented an image of easily attained wealth in an almost magical land, with wide roads, large buildings, enormous opportunities. Everything greatly exaggerated, an almost mythical view of things that fed the imagination of people back home allaying any final feelings of trepidation,” George Kozonalds had said about his reasons for migrating to Australia.

“I arrived at Port Melbourne on the 14th of August, the day before the Dormition of the Virgin Mary. The image before me was bleak and unexpected. Small houses built low to the ground with corrugated tin roofs. Everything seemed run — down and in poor taste. It was nothing like I expected, the vast continent with the modern buildings that I had envisioned,” is the image conveyed by Michael Maragoudakis.
The first impressions of this Promised Land as conveyed by Stelios Koukouvitakis are even more pronounced. “When I saw the small terrace houses I froze. I imagined large aristocratic dwellings in line with the wealth that this country represented and, suddenly, I was facing a reality that I had trouble accepting. Five families in a pokey little house, one bathroom, one kitchen, with the women waiting in line to cook. Unbelievable.”
Litsa Athanasiadis gives further expression to this particular epoch. “We reached Melbourne at Christmas. It bore no resemblance to the things we’d been told to entice us here. ‘A life of luxury’, ‘easy jobs with high wages’, we soon saw that things didn’t add up. The image presented to us before we left was unrealistic and we, like so many others at the time, had to come down to earth…we were all in deep waters, but that didn’t mean we wouldn’t fight to survive.” Yes, for most it was a difficult landing but that didn’t mean that they would give up easily. The motivation to succeed was strong and not open to negotiation.”What I was positive about was the need to help my family back in the village and, moreover, there was no way that I would ever allow my children to experience, even remotely, the deprivation that I experienced as a child. I was very clear about these two objectives,” divulges Dennis Patisteas, expressing the inner psyche of a whole generation. Tasos Tseprailidis and his wife Maria also stepped sturdily onto this new land with two goals: “We both had each other’s support and two shared aims: that our uprooting not go in vain; to build a better future for our children and to be in a position to help our fellow man. They were firm aims that we never waivered from, that kept us going when things got tough.”

For these first generation Greeks, the possibility of return within a few years is another powerful antidote where their adversities – unforseen for the most part – are concerned. Profound disillusionment sets in when perceiving that things rarely evolve according to plan. Unexpected factors usually influence outcomes. “For five years I chased the train of return. When I reached the station, though, the train had left. By the next station, three children had arrived and the train was travelling at 500 kilometres an hour! It was too late,” says Stelios Koukouvitakis giving one of the most vivid and accurate pictures of the hopes and disappointments of Greeks in the 50s and 60s mass migration era.
Through Portraits of Hellenes in the Antipodes it can be clearly seen that, as far as the first generation is concerned, their initial objectives for economic and social advancement and the creation of better opportunities for their second generation offspring bear fruit to a significant degree thanks to their hard work, their endurance in times of hardship, their ingenuity, their sheer intelligence. Simultaneously, they engaged in tireless endeavours for the maintenance and transmission of the Greek language and culture to the next generation.
These endeavours are acknowledged and often characterised as ‘heroic’. Leslie Gellis has the following to say: “There is no question that the first generation were superhuman in endeavouring to secure maintenance of Greek identity in our generation, in any way they could and under very difficult circumstances. Our parents worked hard to ensure that we learnt the Greek language as well as the Greek customs and traditions that they brought with them when they made the huge decision to migrate; to give us the opportunity to know our cultural heritage. They did all this while making enormous sacrifices to offer us a good education, to provide us with all that we needed to secure a bright future. The first generation is HEROIC. This is the only word that can be used to characterise them.” What I need to stress is that this publication, the breadth of its contents, reflects only a small part of the impressive presence of first and second generation Hellenes in the Antipodes.
Portraits sketched by the subjects themselves and which this writer attempts to relay to you, the readers, as authentically as possible.
I extend a warm thank you to all those who were willing to share their precious life stories with us.
I am grateful for their sincerity and their honesty.